I signed up to host today’s guest the moment I espied ‘Il Padrone’. I’m so looking forward to reading it.❤️

A very warm welcome to my guest Leigh Kenzie…whom I’d like to thank for agreeing to be interviewed too.

Now that I own him, there’s no escape

Allesandro
I’m Il Padrone, the Master of this Family, and Emilio will learn his place. I’ll bathe in his tears and watch as he humiliates himself. It’s all for my pleasure. I own it all and he’s just another addition to my collection.

Emilio
Il Padrone calls me his toy. His property. He says I can earn the right to be higher in his organization if only I submit. If only I change who I am. I may be younger, but he hasn’t seen the likes of me before.

Just how twisted can a tale of vengeance become?

Trigger Warnings: This is a dark MM Mafia with graphic violence and extreme sexual situations.

Book 1 of the Vendetta Series ends on a cliffhanger. Book 2 releases September 2020!

When did you first realize that you wanted to be a writer?

This is actually a rather complicated question for me. I’ve always loved to write. It probably comes from the fact I’m an avid reader. My father taught me the value of a good book and growing up it seemed I was always reading, at least according to my family. With that my mind liked to spin its own stories as well. My grandmother encouraged it and actually gave me a typewriter to work with on creating my own stories. I put it aside though for many reasons. It wasn’t until recently that I decide to try, mainly because I lost two of the most influential people in my life. They had always encouraged me to try and after losing them, I decided I should at least attempt it, even if it’s terrifying.

How many books have you written?

This is my first book. I had a short story that was part of the charity anthology, Tainted Tales, earlier this year.

How long does it usually take you to write a book?

How did you come up with the idea for your book?

I was talking to a friend about how I wanted to read some dark M/M mafia and she suggested I write it. I ran the idea past one of my alphas. On her encouragement, I went ahead and wrote a very raw scene and sent it to my other alpha that insisted I write the story. After that it was just a matter of listening to the characters and naughty plot monkeys that live in my head.

Who are your favorite authors? Have they inspired your writing?

There are so many! Michelle Brown deserves major credit for me doing this. She’s a phenomenal author. I love how strong her writing is and she’s been such a positive influence. Claire Marta is a great example of dark and twisted, which is where I generally fall. I’m also blaming her for my propensity to use cliffhangers. I learned from the best there. Sara Dobie Bauer may as well be called the Queen of Feels. Her characters are incredibly lifelike. Tanya Chris always gives such unique work that really makes me think. You can tell she puts a great deal of thought and research into what she writes. A.G. Carothers doesn’t just challenge the norm; they obliterate it in the best way possible. All of these authors have influenced me, whether it’s from a writing perspective or even just personally by being so willing to be there for me. There are even more but I would probably be writing an entire novel just on that!

Is there anything you find particularly challenging in your writing?

I think the most challenging part is learning the grammar rules. I thankfully have a super patient editor and extremely detailed proofreader. The quality of my writing improves throughout the series.

Where is your favorite place to write?

I’m a pretty boring person who likes routines. I only write at my desk. However, I plot everywhere. The plot monkeys and characters become especially chatty during driving.

When you develop characters do you already know who they are before you begin writing or do you let them develop as you go?

I am a complete panster. My characters develop as they go. Most of the time they pop up from nowhere. Sometimes with an actual story, other times with a line or two. They occasionally change the entire plot on me. I try when they pop up to think about them and figure out who they are but they do what they want. I just listen to the voices.

Do you aim for a set number of words/pages per day?

I have a very busy and chaotic life. At most I get three writing days a week generally. My aim is 2,500 words a day on writing days.

What is the hardest thing about writing?

Finding time is often the hardest. I have a job I absolutely love but it is chaotic. I have several bosses so I’m constantly juggling throughout the day. I also take care of an elderly family member. Between that and two terrors of terriers it can be difficult to find time.

What is the easiest thing about writing?

I watch my servants scurry around to complete my orders as I get ready for my guest. I laugh mentally because he’s definitely not going to feel like a guest. I’d care if I had a heart, but as most accuse me of, I don’t. I’m greedy, and I know it.

The bedroom is two doors down from mine. It’s a basic bedroom, freshly painted white. There’s a bed in the middle and a closet with built-in hangers. A small bathroom is joined to the room, but there’s no door. The toilet, sink, and cramped shower is barely enough to stave off claustrophobia. I’m sure he’ll complain about the door—or the lack thereof—but really, I’m being nice considering the size. Most of the comforts my previous boy enjoyed have been removed. It takes time to earn those luxuries. I like to leave some rewards in the room like blankets, pillows, and even a limited amount of clothing. It’s not out of kindness, really. It serves my purpose to give him things I can take away when he rebels as he learns his new role in life—and he will rebel.

I’m pleased with how everything is coming together. The room between us has already been fixed to my specifications—it’s a place for me to play with my new acquisition. It’s the one room that I wouldn’t let the servants touch. It didn’t need much anyway, but the cell is ready for any significant disobedience. I can’t stop my evil grin because no matter how well I explain someone’s new life to them, they always end up there. Thankfully, I have cameras in all three of the rooms, so I’ll get to enjoy the show as he breaks, and as I mold him into my perfect boy.

As the servants leave, Luca walks in holding a file.

“I have all the information you requested,” he notifies me with a disapproving look, barely able to meet my eyes.

“Give me the highlights.”

“Name is Emilio, but he goes by Lio typically. Mother is deceased, father unknown. Interestingly, Cliff isn’t his full brother, although I’m not sure if they’re aware of that. It came from the blood work when the mother was in the hospital, and of course, I accessed Emilio’s medical file. We already have Cliff’s. Different fathers,” he states tiredly. I’m sure he didn’t sleep much as he worked to find out everything there possibly was to know about Emilio for me.

He pauses for a moment. I’m not sure why he’s scowling now, but it could be due to my gleeful expression. Knowledge is power, and that’s a good find I can use against Emilio. I try out Lio mentally, but I’m not sure how I feel about the nickname. It’s not like he’ll retain his name anyway, so I dismiss it.

“What else have you found?” I question, gesturing for him to finish.

“He’s…different. Much different than your normal choices. He’s a junior in college. Very young. He’s only nineteen. Extremely intelligent. Everyone in the mathematics department I was able to speak to had glowing recommendations. He’ll be the type to be missed. Aside from his high IQ, which testing shows is among the top percentile, he’s rather oblivious about life. He’s never dated, and nobody can figure out if he’s gay, straight, or other. He’s had both sexes flirt with him, but he didn’t respond. The professors can’t decide if he’s legitimately clueless about being flirted with or simply uninterested in sex,” Luca stops briefly and shifts uncomfortably. “He’s so young, with his whole life ahead of him and his disappearance won’t go unnoticed. After the last boy…”

Luca abruptly halts when he sees the fury on my face. He knows this is not his decision to make. I’m in charge, and it seems like my friend needs a reminder who is Il Padrone here.

“Everything you said increases my interest. I’ll enjoy making him my best boy ever. At least you’d better hope for that outcome. Because once he’s here, you’re going to be the one to cover his disappearance. Oh, and instead of giving him a life to go back to, I want you to completely ruin him. There will be nothing but ashes left when you’re done, correct? Because I know you’re worried about what I want and don’t really care about my new toy, right?” I end the last question with a deadly quiet voice that reinforces my position. I see his face go grey, and I’m satisfied I’ve made my point.

It’s too bad I had to do that, but it’s necessary. At least this means Lio is going nowhere, and when I’m bored, I’ll simply find a solution to take care of the problem. With a quick wave, I dismiss Luca and decide to recheck all three rooms. After all, I need it all perfect for the new property I’ve acquired. This time, I can’t stop the laugh from escaping. Really, I don’t even try. This is going to be perfect. 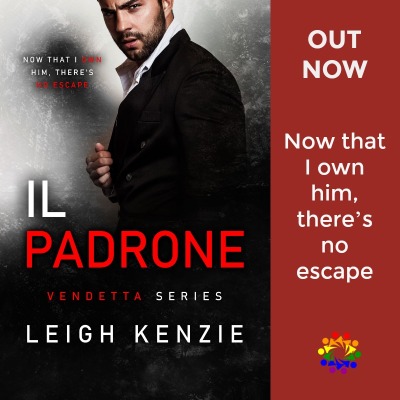 Leigh is a dark M/M romance author from Texas with two needy terrors of terriers and a chaotic family. She considers coffee a major food group and her family fears broken coffeemakers. She writes in her spare time, forced to the keyboard by characters entirely too vocal in her opinion and often falls victim to plot monkeys. In between creating mayhem with her characters and friends, her hope is to transport readers to fictional places and provide darkness with a twist. Enter the Rafflecopter giveaway for a chance to win

Follow the tour and check out the other blog posts, interviews and reviews here