I hope you’re keeping well. I’ve been readying My Way for release, which should be done by the end of the week, but in the meantime… I’d like to welcome my guest J. N. Marton with her new novel My Ticket Out.

Book Title: My Ticket Out

Themes: Coming out, Embracing who you are

It is a standalone story.

Charlie Baker wants out. She wants out of her small, southern hometown of BluHaven and she has her sights set on a basketball scholarship to a college as far away as her dreams can take her. Everything is going according to plan until she moves to town.

Aspen Sullivan is breathtaking. She is beautiful, smart, talented…. She evokes feelings in Charlie that she hadn’t thought possible. When their friendship blossoms into something more, Charlie discovers a new truth about herself. But with Aspen’s mysterious past, they must keep their relationship a secret.

Will their love be strong enough to endure the trials of deceiving those closest to them? Do they have what it takes to escape the constraints of the south and the closet together?

My Ticket Out is a Young Adult, LGBT story about love, and self-discovery. If you enjoy stories that include romance, heartbreak, and embracing who you are, then you will definitely love this book by author J.N. Miller.

Pick this book up today to see if Charlie will find her ticket out.

Friends-to-lovers and coming out tales have forever been favourites of mine, no matter when that dawn of awakening occurs. I’ve particularly loved books about two girl friends falling in love since reading my very first: Hey Dollface by Deborah Hautzig, many moons ago. It remains a charming coming of age story to this day, despite being more than a mite dated, having been published in 1978. This book makes that one seem…fluffy. Quaint. While both are told from the POV of a teenager who finds herself falling for her new best friend, forty years makes for a very different read.

Charlie and Aspen’s story is far from a ‘romance’ in many ways. They spend as much of the novel apart as they do together, and those shared times often focus on the difficulties they face, rather than the romance aspect. Although there were some lovely moments of emotional intimacy, these insights were often shared retrospectively by Charlie. Expressed through sorrow when she and Aspen were forced apart, rather than shown during their together times. All my favourite scenes were their stolen moments spent curled up, watching movies and simply hanging out. I would have loved more of these and a mite less angst but that is purely a personal preference.

The students and school setting were written so well and captured so vividly, I felt myself transported back in time. So much so, I wouldn’t have been surprised to feel a sore throat coming on. Or a headache. Period pains. Appendicitis. The peer pressure and spite, bitchiness and bullying were palpable. How I felt for Charlie in those scenes and admired her strength in both facing them and remaining true to herself.

I rooted for Charlie and Aspen all the way, no matter how fractured their relationship became at times. They had a helluva lot to overcome in order to be together. It was hard to judge Aspen for falling in line with her fathers wishes and trying to placate him because being a teenager is tough enough without losing the love of a lone parent. Her subsequent actions were less easy to forgive…if understandable in the face of that fear. He was a difficult man with his own issues, which is a scary tightrope to walk without further inciting their ire.

It was harder to forgive Charlie at times for being a very selfish sort of friend. Riley is a fabulous character and loyal to the last. I possibly liked her, Matty (Charlie’s brother), and Aspen’s Aunt Beth most of all. Charlie treated Riley  dreadfully when their rivalry for the basketball scholarship reared its head. Riley may have had more options open to her, but Charlie’s passive-aggressive attempts to guilt her into giving up the place, should she earn it, made me very uncomfortable. Charlie’s dreams may have depended on what she deemed her ‘ticket out’, but the pressure she put on Riley to reject the opportunity was most unfair. Particularly when Charlie herself uses the expression ‘it’s not fair’ very often when things don’t go her way.

Living in the UK, it is shocking to witness such everyday religious bigotry. Homophobia tends to be a…visceral reaction to same sex couples here; be that a personal hatred or learned within a family. While I’m sure we must have extreme evangelical Christians intent on praying the gay away, I never come into contact with them. While I have known devout Jehovah’s Witnesses and Mormons, English Protestants don’t tend to vehemently expound their beliefs. The bigotry Charlie and Aspen faced from God-fearing folk was gut wrenching, heartbreaking. It makes me sick to my stomach that people who preach that God is love spend so much time proclaiming hatred.

This story is a rollercoaster ride of emotion, rather than a romance. It focuses on Charlie’s personal growth rather than that of her relationship with Aspen. A fact which seems borne out by the ending of the book, so don’t hold out in hope of a hea for its heroines. However, if you enjoy well-written stories that put you through an emotional wringer of very real feels, this is for you.

“We did not come this far to roll over like a bunch of pigs! Take the ball and put it in the damn basket!”

Twelve seconds left on the clock.

Twelve seconds is all the time we need.

Defense pounces the second the ball is inbounded like a leach latching itself to the only available life source.

The fast break is swift–over before it even started. One hard dribble towards the middle and the ball is launched to the center of the court.

What comes next is second nature. A hard cut to the basket and back out to the wing, my hands raised in the air as I catch the ball before defense has time to adjust.

Two seconds… it swirls around the rim.

One second… and falls to the ground.

The sound of the buzzer erupts through the gymnasium, solidifying our defeat. Final score thirty-six to thirty-seven.

I inhale the musty stench of sweat, perfume, and hairspray as we sulk into the locker room and take a seat while we wait for the aftermath that is Coach Stewart. I lean forward, resting my elbows on my knees and focus on the sweat dripping from my forehead, plummeting to the ground, leaving a minuscule puddle between my shoes.

That’s all we needed. And I blew it.

My main priority from the second this year started was getting a basketball scholarship out of this small town. From our very first game, it’s felt like my life has been dependent on one specific goal. A single accomplishment–like making the game winning shot–is going to make or break my future.

Coach Stewart charges through the door, letting it slam against the concrete wall as he steps in front of us. His gaze is intentional and cold, his demeanor full of discontent and indignation. His eyes trace over us, one by one, pausing just long enough for us to feel the misery set in.

He dips his head, slowly shaking it back and forth, before he holds up his index finger. “One shot. One damn shot. That’s all we needed to be undefeated this season.” He lifts his head, settling his hands on his hips. “We made mistakes tonight. And sometimes one mistake is the difference between winning and losing. The season’s not over yet. We’ll just have to practice a little harder to end it on a high. We’ve got a few games left, don’t give up now. Practice tomorrow after school. Bring it in.

I shuffle to my locker, ignoring the hushed conversations happening around me, and begin gathering my stuff.

“That was a nice shot, Charlie,” Riley says as she pulls off her jersey, tossing it to the growing pile on the floor and retrieves her tshirt from the locker next to mine.

“Thanks,” I mutter, “I’ll see you tomorrow,” and sling my bag across my shoulders, heading for the door.

I get about three steps away from the locker room when I’m cut off by Ben. He’s wearing faded jeans, a red and black flannel over a plain white shirt, and boots with dried mud on the sides. The typical wardrobe of the boys that live around here. He’s taller than me by about three inches, with chocolate brown hair falling in his face, and forest green eyes that can’t seem to focus on what’s in front of him. “Hey, Charlie. Nice game.”

“Thanks,” I say, trying to brush past him.

He takes one long stride to the right, blocking my path. “I was thinking about checking out that new movie this weekend. Thought you might like to join me?”

He leans in closer, the smell of popcorn lingering on his breath, “C’mon, Charlie,” He whispers, “It’ll be fun. It wasn’t too long ago you jumped at the chance to go out with me.”

That’s not actually true. I only went out with him because Riley insisted and I finally agreed in order to get her off my back, not because I found him even remotely attractive. Of course, he doesn’t realize that, which isn’t all that surprising when I really think about it. We did the typical dinner and movie date but he couldn’t hold a conversation that didn’t revolve around him. Within the first twenty minutes of the movie, he’s shoving his tongue down my throat. I managed to wrangle him off before awkwardly sitting there trying to pretend I was somewhat interested in the film playing on screen. I haven’t gone out with him since.

“Ben, I need to get home. Can we talk about this some other time?”

“So,” he says, straightening up, his tone chipper as a smile plays around his mouth, “You’ll think about it?”

I stagger past him, picking up my pace as the EXIT sign beacons above the door, hoping my silence will answer his question.

I step outside, breathing in the bitter, frigid air of late February and make my way to my old grey Sedan. I pull out of the parking lot and head towards downtown. BluHaven is a small, southern town where the same families, shops, restaurants, and business have been here for generations. There’s a church on nearly every street corner, everything shuts down on Sundays, high school sports are the main source of entertainment, and everybody knows everything about everyone.

They say you have the freedom to be whoever you want to be, to express yourself in your own way. But if that goes against the belief system that’s been set in stone since before I was born, then don’t even bother. It’s not that I hate living here. It’s just that I never felt like I truly fit in, like my place has always been somewhere else in this world.

J.N. Marton graduated from the University of Central Arkansas with a Bachelor’s degree in education. Along with educating the future of our nation, she enjoys taking her daily morning run, reading any book she can get her hands on, and binge watching the latest shows on Netflix. Marton happily lives with her wife, Hollis, and their Lab/Basset Hound mix, Sam. 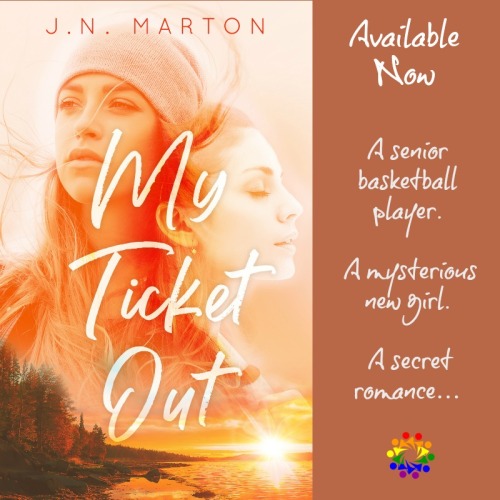